The world’s largest wildlife event, the Birdfair, has celebrated its quarter century by raising a record amount for conservation. Birdfair, which is held annually at Rutland Water for three days every August, is jointly promoted by the RSPB and the Leicestershire and Rutland Wildlife Trust.

A cheque for £270,000 was presented at a special reception on 4th February to Dr Marco Lambertini, BirdLife International’s Chief Executive by Martin Davies and Tim Appleton, the fair’s co-organisers. This donation will help fund the BirdLife International partnership’s work on migratory birds in the grasslands throughout the Americas, from “Prairies to Pampas”.

At the event, the Birdfair also announced that the 2014 event will raise money for BirdLife’s Marine programme.

The world’s seabirds are more threatened than any other group of birds.  BirdLife Partners have been engaged in mapping marine Important Bird and Biodiversity Areas around coasts, in territorial waters and on the high seas. The funds from the fair will enable the BirdLife Partnership to work with national governments and international bodies to create a network of marine protected areas.  These areas will not only conserve seabirds, but will also help protect marine mammals and fish stocks.

This work will be vital if nations around the world are to stand any chance of meeting the Convention on Biological Diversity’s target of protecting 10% of marine and coastal areas by 2020.

“For 25 years, the bird fair has funded and helped promote the Birdlife Partnership’s work around the world. This is a major achievement in itself”, said Dr Lambertini. “However, it has also done so much more. The £3.34 million Birdfair has raised over those 25 years has been used as start-up funds for so many innovative projects and ideas that its legacy is so much greater. There is no doubt that the event has become a major force for conservation”

Over the years, the fair has funded a diverse range of conservation projects from parrots in the Pacific to the rainforests of Ecuador and Indonesia.

“What started as an idea over a pint of beer between two friends, has evolved into something on a scale none of us could have imagined”, said Martin Davies. “The fair continues to grow and attract more people and exhibitors, with 350 companies and organisations in 2013 and 22,000 visitors. It goes to show that people really care about nature both here in the UK and also abroad and by working together we can all make a difference for conservation.” 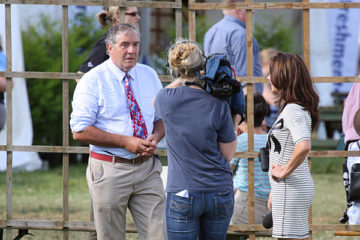 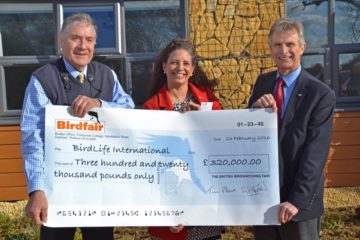